Like everyone else entitled to “R&R” (rest and recuperation), I was counting down the days in my sixth week till I could finally head off on Friday and sleep and eat good food. I hatched a plan of passing by Goma HQ for the afternoon to catch up with my Civil Affairs colleagues there and take Solange for dinner to say thank you for hosting me so generously last time. After a day or two, I would head over to Rwanda, although with no definite plan. With my small carry-on suitcase economically packed and my not-so-economically packed computer rucksack, I was driven to Kalemie airport down the road by one of my team, where, after a quick check-in, I flopped in a chair with a cup of tea and a (rare) cheese sandwich, enjoying the sense of anticipation and responding to looking-forward-to-seeing-you messages from the Goma folk on Whatsapp. An hour later the same team member came to pick me up to drive me back to the office. “Hi Julia, how are you?” said Terry in charge of movement of personnel at the airport, with her customary beautiful smile. “Fine, thanks Terry, how are you?” I responded benevolently and unsuspectingly. “I’m sorry, but you can’t travel today,” she followed. Yep: I’d been bumped off the flight! It happens a lot. The aircraft to Goma is very small, and as going on R&R is considered low priority, I was one of the three passengers chosen to give way to the ex-combatants being flown out last minute. Damn it! If these guys have been hiding out in the bush all this time, why can’t they wait another few days, the thought flashed through my mind.   Maybe my early morning meditation is starting to take effect, because after the split second of wanting to rant and rave, I quickly accepted my fate and shuffled back through security and out into the waiting hall, leaving behind me the scene of the two other forced “débarqués” (both military guys) protesting vociferously. Sigh. Another weekend in Kalemie; another Friday evening happy hour in the cafeteria with the insanely loud and repetitive electronic dance music mix thing along the lines of Cher’s “Believe” that young Congolese seem to love. Fortunately, some ex-pat colleagues who live in real houses behind the compound, invited me for a simple supper and I slept over in the house of a Lebanese colleague who had gone on leave and kindly offered me to stay as long as I wanted. As it turns out, one of my French colleagues is also a fan of Philippe Jaroussky (WHO?!), baroque counter tenor par excellence, and I introduced my beloved “l’arpeggiata” into the mix (South African group whose jazz renditions of Purcell make me jump for joy – yes, it’s a bit “niche” I admit!). In the end, it was a good thing I stayed behind for the weekend, as the “final” draft report Maheshe had sent me along my way with to review, proved to be nowhere near final. At 9.42pm Sunday evening, we submitted it – late as usual.

Another reason I was glad I had to stay behind was that I got to attend the funeral of the (almost) 14 year-old son of a Congolese colleague in security. I never met him. He had died of a tumour the weekend before in hospital in Kinshasha, and it had taken a week to fly him home. A large number of us went to the airport on the Saturday to welcome the body back. The women were crying en masse, seemingly also on behalf of the men. My colleague’s wife and other relatives arrived in the plane with the coffin. My colleague was standing waiting for the van to pull up. As I watched his tired drawn face, I thought he had aged ten years in the last week. The weekend before, he had kindly taken me to view a house and only when he dropped me back did he mention that his son was undergoing surgery that day in Kinshasha. I couldn’t imagine anyone back home finding any head or heart space to worry about some foreigner looking for accommodation while their son was critically ill. The next day – Sunday – we heard the news that the son had not survived. I went with other Congolese colleagues to the family home where relatives and neighbours were gathered. My bereaved colleague sat on a sofa in the yard surrounded by a motley collection of old armchairs occupied by mostly male friends and family. I don’t know him well but instinctively I embraced him and ended up holding him for some long moments. Here, emotion on the part of women is expected and accepted so I cried without shame (not that I don’t normally anyway I suppose!), then took my place in the circle of men. Behind us more people sat on benches and low stone walls, including the father of my colleague, who was crying one minute for his deceased grandson then smiling the next as he bounced another toddler grandchild on his knee. I felt their visceral acceptance of death as part of life. My colleague took me inside the house to meet his mother. She was lying on the concrete floor with other women, most of whom were crying, some wailing loudly. There were small children among them, seemingly unfazed and doing what small children normally do. Some women were sitting up; some were lying on their side or face down under a blanket. I gave my condolences to my colleague’s mother, which were translated in to Swahili, then went back outside to resume my place among the men. As I find often in the Middle East, “western” women are accepted as token men, which is quite a privileged position. I knew the feeling of intrusion I had in the intimate setting of the women was a cultural construct, but somehow my instincts took me back into the open air. I sat for a couple of hours and then took my leave.

One week later, I was back at the family home for the pre-burial service, which lasted a couple of hours and entailed a lot of African choral singing. Again, everyone was out in the yard and it was packed. Thankfully there were some large trees to shelter us from the mid-day sun. Still the men and women were separated. My colleague’s wife was lying down on the floor against a wall, being propped up and attended to by other women as she wept and cried out. Again I noted the lack of tears from the men. So is it universal then that men are not “allowed” to cry in public? There were prayers and a brief tribute to the dead boy, then we all shuffled out to head down the dusty lane to the rather steep-sloped cemetery. Some colleagues got into their cars; some of us continued on foot. Up at the cemetery, close relatives and friends went to the grave for the interment of the body, while we stood back on the lower part of the slope chatting under the trees. I was glad that I had been able to take part in this rite of passage and I began to feel a more integral part of the community here. How I love community! It’s the only way to become fully human and we neglect it at our peril. 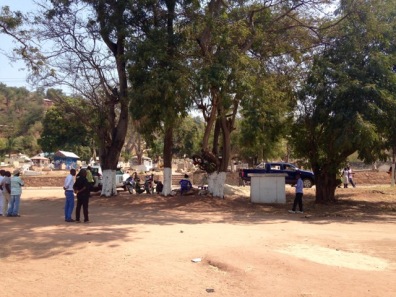 4 thoughts on “An unexpected funeral”

This is a text widget, which allows you to add text or HTML to your sidebar. You can use them to display text, links, images, HTML, or a combination of these. Edit them in the Widget section of the Customizer.